HOW TO FIND LOVE IN A BOOKSHOP by Veronica Henry (2016)

I didn’t expect to like this book. I liked the “bookshop” part, but if the “love” part was too mushy or maudlin, I’d set it aside. I decided to read a little to get the tone of the book; give it a fair chance. I’m so glad I did! Nightingale Books is a place I’d like to go, and the people and their stories are lovely and heartwarming. 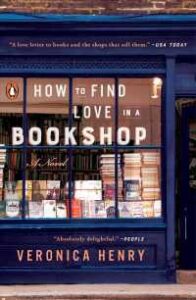 The 1983 origin story of Nightingale Books in Peasebrook, England, was anything but lovely and heartwarming, however. Julius Nightingale had recently become both a widower and new father within a matter of minutes. Once he started to recover a bit from the shocking events, Julius realized he needed to make decisions about his life and find a way to provide for his tiny newborn daughter, Emilia.

Julius had an M.A. from Oxford and various related experiences, none of which promised a stable career or home life for a child. He had also taken a side job in a local bookshop. He loved the atmosphere and decided to open his own shop.

Julius found just the right building in Peasebrook, which oddly had no bookshop despite having residents who would clearly like one. “After all, a town without a bookshop was a town without a heart.” [p. 3] Residents seemed enthusiastic about having one.

The building even had living space for him and Emilia above the ground floor. The work needed to refurbish the building and stock the store proved not only therapeutic for Julius, but also gave him the opportunity to meet many of the townspeople who became regular customers.

Julius was born to be a bookseller. We learn later that he didn’t do very well on the practical side of the business, but he provided personal touches that brought people to his shop for more than books. He took time to learn about his customers; what they liked and didn’t like, and what they needed, even if they didn’t know it themselves. Sometimes people just needed to talk over coffee and have someone listen without judging. It was a place of peace, comfort, soft music, no time limit on browsing, no pressure to buy…a place of human connection.

When Julius died 32 years later, his absence was devastating for the community. Emilia returned from teaching English in Hong Kong for his last few days. In addition to her heartbreak, she needed to decide what to do about the shop: should she take over the business and run it herself? She had an offer to buy the property, but could she bear to see her only home and the shop demolished? Like her father, she was faced with a decision about how to spend the rest of her life.

Obviously Emilia chose to stay in Peasebrook and run the bookshop herself. After all, the book’s title indicates that love could be found there! Indeed it was, in the various ways love can manifest. The heart of this lovely book is the stories of the people who patronized the shop, not always to buy books.

Julius had played the cello in a quartet. Emilia, though not as proficient as her father, eventually replaced him in the group despite reservations that she was not as competent as the other three members. Through the group, she found a love she did not expect.

Later, Emilia’s carelessness resulted in significant damage to the shop and its contents. In despair, she decided to sell. Instead, the townspeople came together to do repairs. While they were at it, Bea used her creative gifts to redecorate and give the shop a more updated look. People cooperated with their donations and energy to save their beloved bookshop.

One surprise to Emilia was the discovery that her father was not without love in his life. The identity of the woman will also surprise the reader.

One of my favorite characters was Thomasina, a painfully shy woman. She was a teacher with a deep love of cooking, at which she was superbly talented. She visited the bookshop for new cookbooks weekly. She also opened her small home to host an intimate gourmet dinner for 2 on the weekend. She found her own way to deal with her issues, gained self-confidence, made a positive contribution to the community, and mentored a “problem” student who also proved to be a naturally talented cook.

Emilia helped another character who became likeable to readers. (You’ll have to read the book to find out why Jackson wasn’t initially likeable.) He wanted to find a book he could read to his young son. Emilia learned that he had never actually read a book! As it happened, not only did the son enjoy the book she chose; Jackson also discovered he enjoyed reading to his son as well as the new bond it created between them.

“That was the whole point of Nightingale Books. It cast a spell over its customers by introducing them to the magic. And how wonderful, for her to open up a whole new world–” [p. 187]

June, another character, was an older woman living in Peasebrook and a bookshop regular   She had been a Twiggy-like famous model and actress in her early years. At that time, she had a volatile affair with an older man that ended badly. Decades later, he’d become a famous and popular author whom Emilia invited to speak at the bookstore. Did he remember June? Was their romance rekindled in a more mature manner?

“…[T]he shop had become a mecca for all sections of society in and around Peasebrook. The townspeople were proud of their bookshop. It was a place of comfort and familiarity. And they had come to respect its owner. Adore him, even. For over thirty years, he had fed their minds and their hearts….Her father was still here, thought Emilia….All those words, and the pleasure they had provided for people over the years: escape, entertainment, education…He had changed minds. He had changed lives. It was up to her to carry on his work so he would live on, she swore to herself. Julius Nightingale would live forever.” [p. 12]

It’s easy to see why this book has remained popular even several years after it was published. After reading Veronica Henry’s story of Nightingale Books, Julius and Emilia Nightingale, and the wonderful people of Peasebrook, readers want to revisit them. That can only be done by reading and re-reading her book.

This book will be available at Grover Beach Community Library