Grover Beach used to have a library. On May 20, 1980, it was closed in order to consolidate all library services in the new county library on Branch Street in Arroyo Grande. The little library on south 9th Street was sorely missed.

With the encouragement and financial support of Clifford and Mary Lee Clark, the South County Family Educational and Cultural Center non-profit corporation was formed in 2000. Money was loaned to the corporation by the Clarks to purchase the old Grover City fire station at 9th and Ramona and additional property was given to the city as part of the deal to be developed for public benefit as a possible children’s center, children’s theatre, craft center, and a library.

In January 2002, members of the community who were interested in a library were invited to a preliminary meeting. Attendees included Exploration Station supporters, representatives from Lucia Mar School District, city council members, the director of the County Library System, and local business people.

A number of meetings followed and a committee was formed to study the possibilities. We considered grants for a new building, a joint venture with the E Station, a funding program to build, or… Through much thought and consideration, we brought our thinking down to earth. To build a facility would require raising at least $2,000,000.00. A half-time librarian would require $40,000.00 per year. These goals were not within the reach of our small community. We had to start small. From this committee a board was formed consisting of Nan Fowler as President, Jessica Fetcho as Vice President, Mary Lee Clark as Treasurer, Carol L. Roberts as Secretary, Claire Gates, Sindy Fligiel, Norma Newdoll, Cheryl Storton, and Clifford H. Clark; and with a $5,000.00 start-up gift, we went to work.

By September of 2003 we were our own non-profit corporation under our chosen name, “Grover Beach Community Library”. The new library was named so as to define what we wanted our library to be and those it was to serve. For the first year we held book sales, sold book bags, solicited donors, developed a list of “friends of the library”, considered sites, and learned the ins and outs of running a library. None of us were trained librarians. This was truly on-the-job training. It was decided we should start small and open as soon as possible.

The Exploration Station was just getting organized at the time and offered to rent us a large room to be used as a library for $100.00 per month. Volunteers arrived from every direction. They cleaned, built and installed shelves, sorted and covered books, set up desks, and we were open for business.

We continued to add books, raise money to pay expenses, and develop a growing clientele. Our community use grew slowly, but within two years we had over 500 names on our list of cardholders. We had always talked about the need of a library for children, but it was the seniors who discovered us.

The Exploration Station was growing and so were we, so when Mr. Clark offered to rent us the front half of his building initially, and the rest of it when he retired, we moved across the street to 240 N. 9th Street.

In January 2007, we opened at our present location. We almost immediately doubled our patron base because of better visibility, the surge of publicity about the move, and more days and hours. We added Friday to our schedule. When the AG library closed on Monday, we opened on Monday. Later we added Saturday from 10:00 am until 2:00 pm. Currently, we are open 5 days a week, and we have issued more than 1600 library cards to date.

We have a large selection of fiction, from the latest novels to old standbys. We have a nice selection of large print books, which are welcomed by many of our older readers. Our collection of non-fiction is smaller but growing, and includes a reference section on California history containing many works by local authors. We also have a Classics section consisting of those special books which have withstood the test of time.

The children have found us, I think in large part due to the efforts of several of our volunteers, including a retired pre-school teacher, an elementary teacher, and a children’s librarian. They painted the Kid’s Korner a bright yellow, decorated the furniture, and set up a different system for shelving books. Our children’s collection contains sections for Toddlers, Beginning Readers, Children, and Young Readers, with this last section further divided into fiction and non-fiction. We also have a separate section for teens just around the corner.

We have a book club which meets monthly, a children’s reading program during the summer, and storytimes for toddlers and pre-schoolers by appointment. We have three book sales spaced throughout the year, and special fundraising events in February and October.

Our volunteers are our backbone and the strength of our endeavor. Without them, we would have nothing to offer. Our volunteers choose their jobs according to their interests. They determine how much time they can give and when they can give it. Our volunteer librarians undergo a short supervised training program, then sign up for their work by putting their name on the calendar. Most work two days per month. Other volunteers come to our “work days” on the first and third Wednesdays of each month to cover and shelve new books, and take care of other collection maintenance jobs. Several people have full-time jobs so they do book sales, fundraisers, and grant writing.

Now, we come to our future. We will continue to grow. Ultimately, we may be able to buy or build the perfect facility we all dreamed about in the beginning. We have an endowment fund to guarantee the future of the library, and we encourage anyone interested to consider a bequest. Mr. Clark has been instrumental in showing us how we can aid the library in our estate planning, and he has offered to set up such arrangements pro bono for anyone who might be interested.

We hope to expand into the other half of the building we now share, which will give us the additional space we need to enlarge our collections. For now, we seek to grow our patron base, expand the quality of our offerings to the community, and to live by our mission statement: “To Serve the Grover Beach Community as a Family-Friendly Library”. 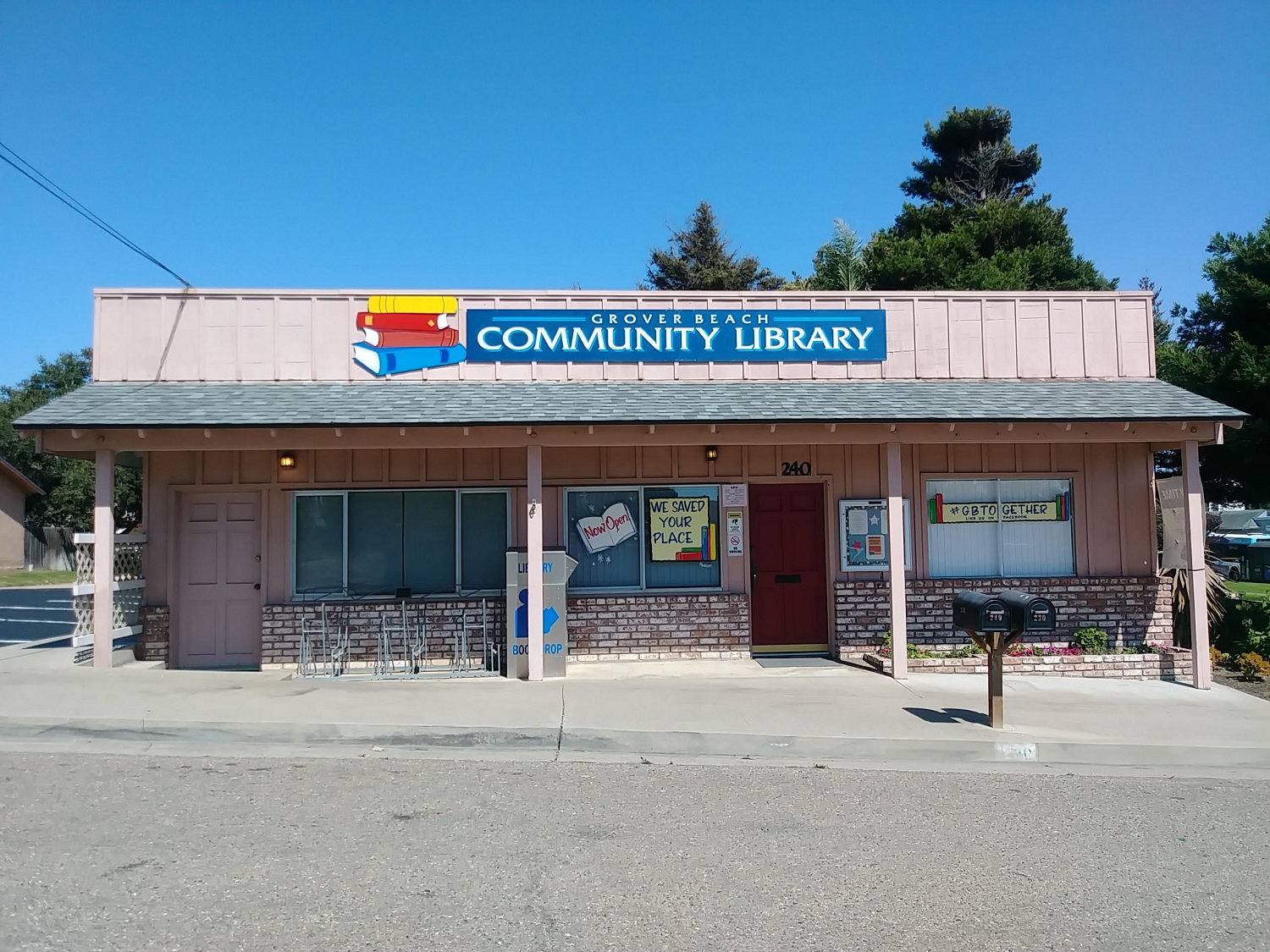